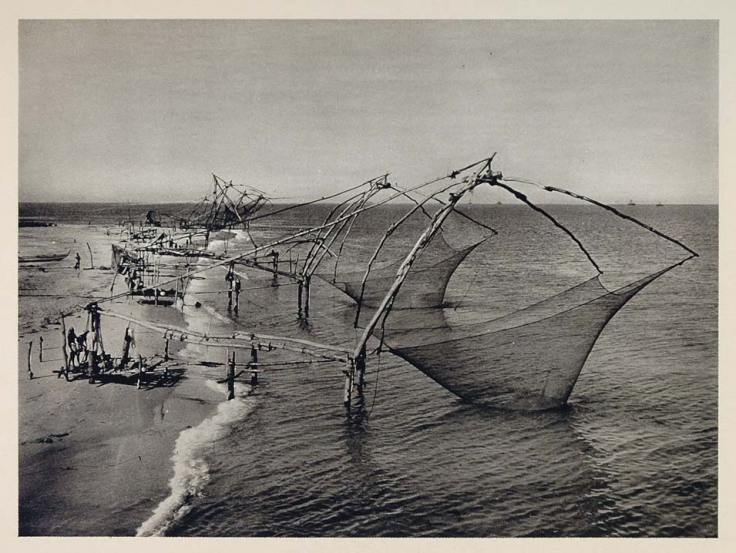 A new acquisition for my collection, this 1928 Martin Hürlimann photograph of the Chinese fishing nets at Fort Kochin, leads to news from the Indian Express on the Keralan government’s decision to fund the restoration of the nets, a key tourist driver for the state.

David Smith at Jacobin on the depth of George Orwell’s socialist politics.

And the return of The The.

It’s a big day in the office with today’s opening of our latest suite of exhibitions. For me, this means celebrating three exhibitions: Pretty Good for the 21st Century, Free Radicals: Cinema on the Wrong Side of the Tracks and Glitch Envy: Experimental Films by Jodie Mack.

The Free Radicals exhibition is the larger exhibition here and features works by Rodney Charters, Bruce Conner, Steve Cossman, Oskar Fischinger, Richard Lomas, Len Lye, Jodie Mack, and the Parasitic Fantasy Band (Eve Gordon/Sam Hamilton). The title of the show is obviously via Len Lye, but the subtitle was taken from Pip Chodorov in his similarly titled documentary Free Radicals: A History of Experimental Film, speaking of ‘cinema on the wrong side of the tracks’. Throughout the exhibition, we’re screening Chodorov’s film alongside the exhibition as well as Brecht Debackere’s EXPRMNTL documentary which explores the EXPRMNTL film festival held in Belgium between the 1940s and 1970s. It was here that Lye’s 1958 film Free Radicals won a prestigious 2nd place. Lye’s 1959 essay ‘Is Film Art?’ lamented the neglect of experimental cinema in the United States and declared he would no longer make experimental films.

I’ve just wrapped up a new programme for the Len Lye Centre’s cinema, our next Projection Series. This is the first dedicated to a single artist (other than the regular Len Lye programmes we do) and celebrates the tenth in the series. Projection Series 10 is titled Glitch Envy: Experimental Films by Jodie Mack.

We’re running this programme every Saturday (1pm) from 12 May through 21 July alongside our larger exhibition concerning experimental cinema, Free Radicals: Cinema on the Wrong Side of the Tracks (Mack’s work features in the exhibition too).

You can view the brochure for this programme here. It includes a new essay on Mack’s work by film scholar Jennifer Stob from Texas State University.

Here are a couple of old but good interviews with Mack, by Stob and Daniel Kasman.